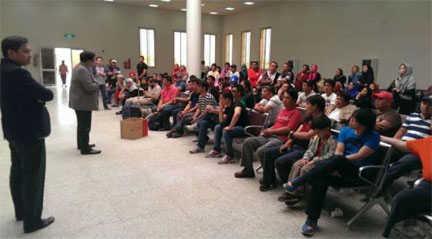 The Crisis Management Team (CMT), led by Philippine Ambassador to Saudi Arabia Ezzedin Tago, along with officials and personnel from the Philippine Embassy in Riyadh and the Philippine Consulate General in Jeddah, successfully evacuated the 99 Filipino nationals from Yemen.

The group traveled on a convoy of two buses. They left the western Yemeni city of Hodeidah at 7:00 a.m. (Saudi time) on April 5 and arrived at the Tuwal border crossing of Saudi Arabia at 11:00 a.m. on the same day.

The journey was generally safe even though the group had to pass through several checkpoints along the 215-kilometer route.

Embassy and Consulate General personnel are now assisting the evacuees in Jizan, providing them food and accommodation, as well as arranging their onward travel to the Philippines.

The CMT will again undertake another land evacuation today from the capital city of Sana’a via Hodeidah.

Filipinos who are still undecided about leaving the country are strongly urged to do so and join the land evacuation by contacting CMT personnel in Movenpick Hotel Sana’a. – BusinessNewsAsia.com