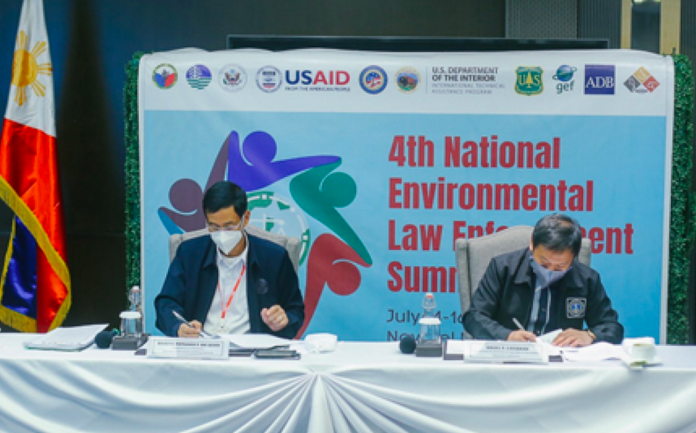 The 4th National Environmental Law Enforcement (NELE) Summit led by the Department of Environment and Natural Resources (DENR) ended recently with the adoption of three resolutions to prevent and fight environmental crimes.

The NELE summit, held last July 14-16, resulted in the adoption of resolutions to approve a five-year indicative plan of the National Law Enforcement Coordinating Committee-Sub-committee on Environment and Natural Resources; to support the enactment of the proposed Environmental Protection and Enforcement Bureau (EPEB); and to request for immediate passage of a bill that will amend Republic Act 9147 or the Wildlife Resources Conservation and Protection Act.

In his keynote message, Secretary Roy A. Cimatu emphasized the crucial role of DENR’s partner agencies in the strict enforcement of environmental laws, as he urged them to “stay vigilant, assertive and cohesive as stewards and guardians of the environment.”

He admitted that the DENR has limitations in enforcing the law, which is why it is important that partner agencies and other entities must cooperate to ensure the stringent and effective enforcement of environmental laws.

“During the current pandemic, restrictions on interzonal movements and numerous checkpoints have driven violators to become more creative. If we can use drones with cameras to monitor forests, the coasts and the seas, so too can the enemy,” Cimatu said in his keynote address read by DENR Undersecretary for Attached Agencies and Chief of Staff Rodolfo Garcia.

“The DENR, by itself, cannot enforce all environmental laws across our archipelago. The challenge requires a whole-of-government response, as well as the cooperation of stakeholders outside the government, from host communities and the private sector to friends abroad,” Cimatu added.

DENR Undersecretary for Enforcement Benito Antonio De Leon said the result of the summit is “the general framework for the effective and efficient enforcement of environmental laws for the next five years.”

“The Summit gave an overview of major developments in each of the concerned sectors. Milestones on the enforcement of blue, green, and brown laws in the last 15 years were also presented,” De Leon said.

According to De Leon, the NELE Summit participants were also “given brief information on transnational organized crime, the roles of the Bangsamoro Government in environmental protection and enforcement, and the creation of the EPEB.”

“These inputs were used in the identification of gaps and development of an action plan that allowed us to finally craft the 4th NELE Action Plan for the next five years,” he added.

The NELE Summit serves as a venue for updating about the latest developments on environmental law enforcement, such as new laws and policies, implementing guidelines, programs, and tools.