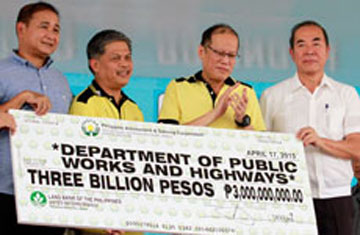 The funds were from the Philippine Amusement and Gaming Corporation (Pagcor) for the Department of Education’s “Matuwid na Daan sa Silid Aralan”.

Coinciding with the turnover of funds was the handover of two new school buildings to the Tarlac National High School here. The school buildings were built by the Department of Public Works and Highways (DPWH), with funding from PAGCOR.

In his speech during the turnover ceremony, the President said that when he assumed office in 2010, he had to confront a shortage of 61.7 million textbooks, 2.5 million school seats, and 66,800 classrooms.

He noted that his administration has been able to address these concerns through its reform program and prudent spending.

President Aquino noted that through the “Matuwid na Daan sa Silid-aralan,” the Department of Education efficiently and systematically addresses the problems in the education sector, especially the lack of classrooms.

He said the Education Department identifies the public schools that need new classrooms, while PAGCOR releases the funds, and the DPWH handles the construction.

The P3 billion released to the school construction program on Friday brings to P10 billion PAGCOR’s total contribution to the initiative, the President said, adding that the corporation has even surpassed the Education Department’s foreign donors.

Out of PAGCOR’s target of 4,500 classrooms to be built under the program with an initial allocation of P7 billion, the corporation has so far constructed 1,124 classrooms in 239 different locations across the country.

Nearly 1,300 typhoon-resilient classrooms are also being constructed in Eastern Visayas, which was devastated by Typhoon Yolanda two years ago. – BusinessNewsAsia.com